Fooling The Probation Officer – Lena Paul
Charlotte Stokely and Lena Paul, two partners in crime, are planning their next big adventure. However, they have to be careful because Charlotte’s already been caught and spent time behind bars before, so it can’t happen again! Although Lena’s skeptical, especially because of regular check-ins by Charlotte’s probation officer, she’s down to experience that rush again. They are interrupted by a knock on the door. As Charlotte answers the door, she’s surprised to see none other than April O’Neil, her probation officer. Charlotte is startled, loudly greeting her so that Lena is secretly made aware that they’ve got to keep everything under wraps. April is amused by Charlotte’s behavior, insisting that she was just in town and thought she’d do a checkup while there. As Charlotte lets April in and settles down on the couch with Lena, it doesn’t take a genius to know Charlotte and Lena are hiding something. April questions how they know each other, reminding Charlotte that its against her probation to consort with any criminals… In that moment, to save them both, Charlotte lies and claims that they are girlfriends! ‘Well, you guys wouldn’t mind kissing then, just to put my mind at ease?’ April casually challenges. Although Charlotte and Lena claim that they’re girlfriends, when they do share the requested kiss, it’s nothing more than a peck on the lips. Unconvinced, April challenges them to take it even further… unless they really have something to hide. Charlotte and Lena know they’re on the verge of being found out, so they go all in to save their skin. Right there in front of April, they strip down, getting hot and heavy. Although it’s awkward between them at first, they soon get into it, relishing the taste of each other’s pussies. As they work each other up to a glorious release under April’s watchful eyes, will it be enough to stay out of trouble? 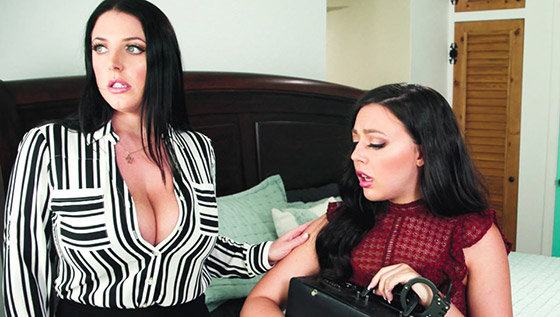