Pure Taboo – Eliza Eves – Chin Up Buttercup
Released: February 15, 2022
CHIN UP, BUTTERCUP
Elena (Eliza Eves) is desperately searching the living room for her cellphone. Her stepfather Nate (Ryan Driller) then enters the room with the missing phone, saying she left it in the kitchen. She thanks him and eagerly checks the phone, but looks disappointed that there are no new messages. Elena says that her boyfriend hasn’t contacted her for the past two days, and now it’s Valentine’s Day. She gets upset, wondering what she did wrong. Nate comforts her, saying ‘Chin up, Buttercup.’ He explains that his wife has been too busy for him lately, and suggests that he and Elena can have their own Valentine’s Day together. Elena says that sounds like a fun idea, and Nate promises to make the day extra special for her…

Nate and Elena then watch a romantic movie, since that’s what Elena had been planning to do with her boyfriend. However, the movie ends up making Elena sad, since it reminds her of the love she thought she had with her boyfriend before he stopped contacting her. Nate takes the opportunity to touch her, acting as if they’re meant to be comforting gestures. He then surprises Elena with a box of chocolates, and creepily admires the sight of her licking her lips after she eats one of the chocolates.

Nate asks Elena what else she intended to do with her boyfriend today. She says it’s not something she can do with anyone else, eventually admitting that she was going to give up her virginity. To Elena’s shock, Nate suggests that he can take her virginity instead. He points out that her boyfriend seems to have ditched her, so it’s better to give her virginity to someone she can trust. Surely he’s the man she can trust the most, right? 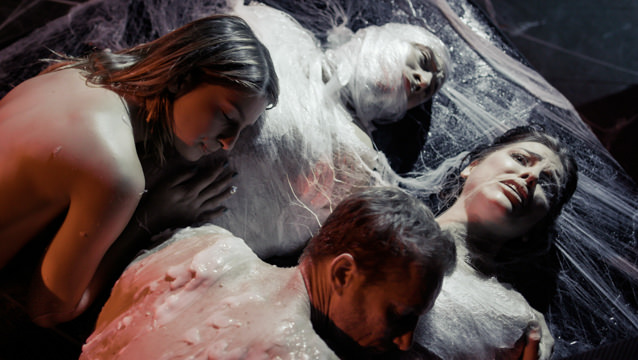